New Aves alums and twin brothers Aaron and Ben Charnay were selected by the Ohio Academy of Science to represent the Buckeye State at the world’s largest international pre-college science competition in Los Angeles May 14-19. Each year, approximately 1,800 high school students from more than 75 countries are awarded the opportunity to showcase their independent research and compete for on average $4 million in prizes. 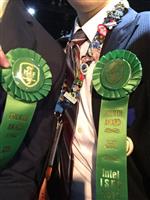 The twins have turned bamboo into a fuel source for their project. It took them four years to develop an efficient way to extract glucose from the bamboo plant. The idea came from watching a friend eat bamboo at lunch.

“Reusable fuels are a big deal right now, so we decided to make ethanol out of bamboo and the sugar that is in it,” Ben Charnay said. “We found there is almost no sugar in bamboo. You have to break down the cellulose into glucose and ferment that, so that’s where our project ended up taking us.”

Once that process was fine tuned, it became simple to distill it into a useable fuel source.

“It took us four years, but we did it,” Ben said. “So to go to present this on the international stage is gratifying.”

The Charnays are heading to the Ohio State University in the Fall to pursue degrees in chemistry. They hope to one day explore battery and large-scale energy storage solutions.

“Science is kind of the thing we do, the Charnays do science,” Aaron Charnay said. “We’ve been working so long and so hard on this, there were nights where we would just cry because something isn’t working and we can’t figure things out. To get to do this is really cool.”