An Aviator alum who leads one of Forbes most innovative companies in the world has been named the 2018 Sycamore Distinguished Alumni.

1981 graduate Mitch Barns has lived and worked on three continents, overseeing more than 46,000 employees worldwide as the CEO of TV ratings giant Nielsen. But to him, home still means Sycamore.

“It’s really hard for me to separate my childhood from Sycamore,” Barns said. “Sycamore was woven into the fabric of my growing up years.”

Barns moved with his family to Montgomery in 1973, attending Sycamore Schools from fourth grade through 12th. His father, Howard Barns, was a longtime teacher and administrator in the district. His mother, Sherry, volunteered with the cheerleading squad while his father coached basketball and football.

“Sycamore was always a part of my life, even before I went to school there. I remember being a little kid and going to school with my dad on the weekends. I would roam the halls, sweep the floor in the gym,” Barns said. “It was pretty much everything. Our family even had a green Dodge Charger and Gold VW Dasher in the driveway.”

By the time Mitch reached 7th grade, his father was named principal of Sycamore Junior High School. When Barns moved to the high school, so did his father. Still, Barns says his father went out of his way to make sure he didn’t receive any special treatment.

Throughout his years at Sycamore, Barns found himself drawn towards mathematics courses. He credits several of his teachers for encouraging his love for math and for pushing him to do his best. Among them, his AP Calculus teacher, Mr. Chuck Sonenshein.

“When I was a senior in high school, I would work late at night as a busboy and dishwasher at Montgomery Inn. I had Mr. Sonenshein first period and would be late to school. I’ll never forget when it came time to take the AP Exam, he told me I shouldn’t waste my money. He thought I was underperforming relative to my potential,” Barns said. “That really ticked me off and made me focus and study hard. And I ended up doing well on the exam.”

It wasn’t just teachers who made an impact. Carl Haverkamp, who served as a custodian at the junior high, left a lasting impression on Barns. 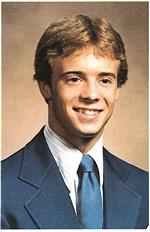 FROM BUSBOY TO CEO

After graduating in 1981, Barns attended Miami University, where he received his Bachelor’s in Business Administration, majoring in Finance.

“I really had some fantastic teachers at Sycamore so, by the time I got to college, I was equipped to get a good start,” Barns said. “The whole Sycamore culture helped us know how to interact with adults and behave in an adult world.”

During his summers while in college, Barns would come back home and work at Montgomery Inn as well as in the Sycamore Maintenance Department, biking five miles to work each day.

After graduating from Miami in 1985, Barns went to work at Procter & Gamble in their marketing research department. In 1997, he left P&G to join a small Cincinnati-based firm called BASES, which specialized in forecasting sales for new products. BASES was acquired by Nielsen in 1998.

Over the next 13 years, his career with Nielsen took him to Brussels, Chicago, Shanghai, and New York City. In 2011, he completed the Stanford Executive Program (SEP) at Stanford University’s Graduate School of Business, an accelerated MBA-style program for senior executives. He was appointed as CEO of Nielsen in 2014.

Despite being the head of one of the biggest global information, data, and measurement companies in the world, Barns still remains close to his roots. His wife of 32 years, Sharon, is from Montgomery. The two were wed at Sycamore Presbyterian Church in 1986. They have three children, Matthew, Emily, and Erik, who grew up overseas, but still love Skyline and Montgomery Inn.

“To be a part of Sycamore is to benefit from a long and rich history of excellence and community. I see Sycamore as a place that builds on the success of the past while always continuing to evolve and move forward into the future,” said Barns. “There is a commitment to excellence, high standards, high expectations, and a willingness to innovate and lead. It was certainly that way when I was a student and from all, I can see it continues to be true.”

Mitch Barns will be honored at the 2018 Distinguished Alumni Reception on Friday, May 18 at the Original Montgomery Inn from 5:00-7:00 p.m. Tickets are available at www.oursafa.com or by calling Sycamore High School at 513-686-1770 and asking for the Alumni Office. Barns will also be speaking at Sycamore High School’s Commencement on May 19 at the Cintas Center.