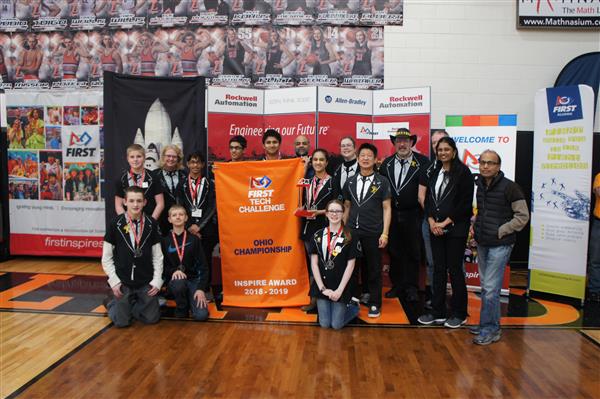 Three FIRST Tech Challenge (FTC) teams with Sycamore students competed at the iSpace FTC Ohio Championship against the best teams in the state on Sat., Feb. 23.

The PowerStackers emerged victorious, receiving the highest honor—the Inspire Award. With it, the team advances to the FIRST Championship, a world competition, for the third year in a row. This year’s world tournament will be held April 24-27, 2019, in Detroit.

The team includes Sycamore High School sophomores Krishna Suresh and Andrew Sakemiller along with members from several other schools in Cincinnati and Dayton. Suresh, who served as team captain, was named a Dean’s List Finalist and will be in the running for one of 10 Dean’s
List Winner spots to be announced at the FIRST Championship.

According to the FIRST website, “The students who earn FIRST Dean’s List Award status as a Semi-Finalist, Finalist or Winner are great examples of student leaders who have led their teams and communities to increased awareness for FIRST and its mission. These students have also
achieved personal technical expertise and accomplishment.”

Aves Ablaze, the Sycamore High School team, placed 20th out of 36 teams in the qualifying matches, averaging more than 200 points in each round. Team mentor Wendy Pelberg received the Compass Award as the best mentor in Ohio.

Innov8, an all-female team comprised of Sycamore High School freshmen, also competed at the state tournament. In only its second year as a team, INNOV8 finished 28th out of 36 teams in the state.