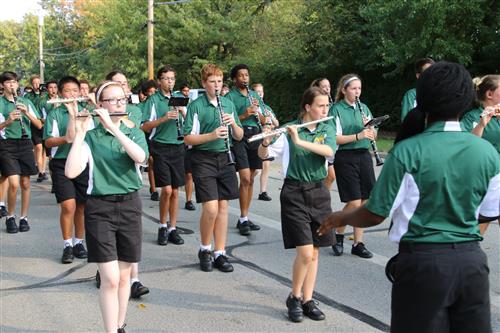 Sycamore High School Band members collected more than $32,000 during their annual Tag Day, thanks in part to a new app developed by one of their percussionists.

Sophomore Rishi Verma developed the Tag Day App to help better organize the event after volunteering during his freshman year. He spent over 100 hours developing the app, taking online courses to learn on his own time.

“Last year I noticed volunteers and drivers getting frustrated because the maps we were using were a decade old and it wasn’t clear which houses had already been visited,” said Verma. “Printing off street maps may have worked ten years ago, but we have Google Maps for everything now.”

“The app helped to organize drivers and students more efficiently and consolidate routes,” said Micah Ewing, Supervisor of Music. “It gave drivers easy access to a Google Map for directions and students an address-by-address guide to visit homes.”

Verma says he plans to make some modifications to the app for next year based on feedback from volunteers.

“Everyone seemed happy with how it worked this year, but I’m going to work the next 10 months to make it even better,” said Verma.

As far as patenting and selling the app, the aspiring computer science major says he’ll wait and see. Click here to see a video tutorial of Verma’s Tag Day App.

Tag Day began in 1958 as a door to door solicitation of the Sycamore Community School District by students grades 7–12 enrolled in the district’s Bands and Orchestras. In the early years, when the students received a donation, the donor was given a small ‘tag’ that they could display to show their support the program.